Andrew has been writing for the theatre since 2000, and has written several well-received plays, usually combining intense drama with explosive comedy. They include:

The Devil and the Deep Blue Sea (Theatre in the Mill, Bradford, 2000)
Caroline Braintree, knowing that we are on the brink of ecological catastrophe, summons the Devil to save the world; but the Devil has his own agenda.

Welcome to Paradise (The Priestley, Bradford, 2003; revised version, Theatre in the Mill, 2006)
Somewhere, in a world not very far away, you are rewarded for having sex, taking drugs, and drinking. Stephen, not very good at any of these things, lies and cheats his way up the ladder to evade destruction at the hands of the sinister Black. Remember: Credit equals merit.

Through Thick and Thin (devised piece, The Priestley, 2007)
In a small, tightly knit community, a young girl goes missing. Fear and hatred boil over into tragedy.

Everest (The Priestley, 2008)
Two women are climbing Everest for charity. Two men are drinking in a pub when one of them has a clever idea. Two teenagers are trapped in a house together. Plots interweave, until everything is miraculously solved by an impossible act of theatre.

Funny Men (The Priestley, 2008; in 2010 the play toured West Yorkshire and was seen at the Edinburgh Free Fringe)
Clive Morton and Jimmy McGee are two successful comedians, tied together through the success of their BBC sketch show "Twisted." Tensions boil over in the rehearsal room as they put together their third series. What makes people laugh? And should it?
"There is a time in every man's life when he has to decide what's more important. Comedy or happiness."
"Fascinating.... if you want your perceptions challenged this is for you." Leeds Guide

Working Lives (Bradford Playhouse, 2011; Seven Arts Centre, Chapel Allerton, 2011)
Metcalfe and Sons is in trouble, though Metcalfe doesn't seem to know it. In Admin, ritual and routine are disturbed only by the arrival of a naive new recruit, and Pauline's fantasies of escape. Do you work to live or live to work? Can Metcalfe's survive the economic downturn? And do the staff even want it to survive?

Below: Nicola Anderson, Peter Newsome, Luke Moorhouse and James Margerrison in the Priestley production of Welcome to Paradise (2003)    Photo by Guzelian 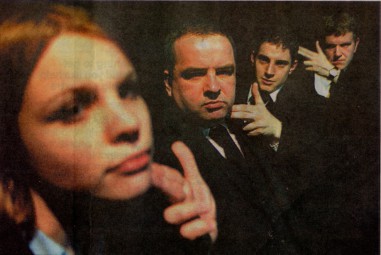 Get social, if you really must: