20 November 2015: An article by me about Gilbert & Sullivan and sexism has appeared on the Guardian website here.

June 2014: Script Yorkshire have run a scriptwriting competition in celebration of their 25th anniversary (ah, we know how to party here in Yorkshire), and my entry, Lunacy, was one of the five scripts to reach the Grand Final. The final took place on 28 June 2014 at the Theatre Royal, Wakefield, with a judging panel including the BBC's Gary Brown and also David Nobbs, who is his own man. The winner was Jacqueline Everett with "You've Got to Hide Your Love Away" but my entry did as well as could be expected.

2013: Devised and Directed by Mike Leigh has been published by Bloomsbury Academic, including an essay by Andrew on Mike Leigh's Topsy-Turvy.

On 4 October 2011 Gilbert of Gilbert and Sullivan was declared the winner of the Non-Fiction prize in the Big Red Read Book of the Year, awarded by the London Borough of Redbridge.

On 15 September 2011 he delivered a talk, "W.S. Gilbert: A Touch of Poetry" to an appreciative audience at the National Portrait Gallery in London.

In May 2011 Andrew was one of the major contributors to the BBC Radio 4 series Gilbert's Glory, broadcast to commemorate the centenary of Gilbert's death. 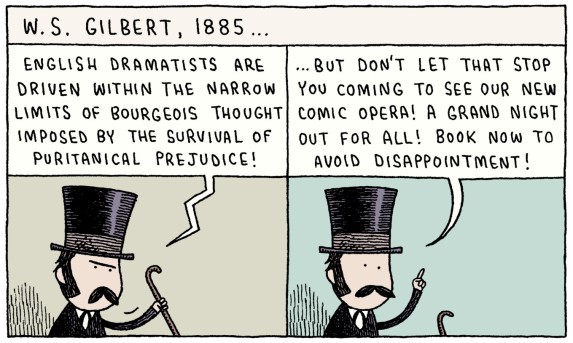 Many thanks to the brilliant Tom Gauld (tomgauld.com) for giving me permission to use this cartoon of his, which appeared on the Guardian Review's letters page on Saturday 18 November 2006 alongside this letter by me. I'm very proud that my rather pompous missive inspired such a gorgeously funny response. 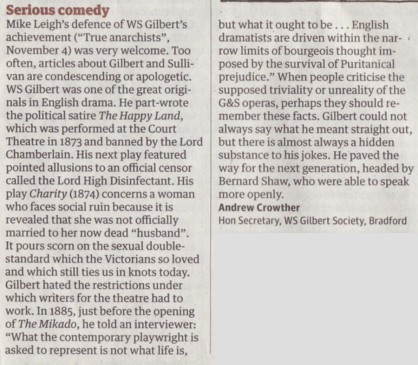 I was going to add links here to my other appearances in the papers and elsewhere, but they would seem like an anticlimax. So for the moment I'll just mention my supporting role in Anthony Holden's 2004 Observer review of The Pirates of Penzance. At his suggestion I accompanied him to the ENO production at the Coliseum and tried to convince him that Gilbert and Sullivan is not (to quote his phrase) "music for people who don't like music." I failed, as you can see here, but at least I tried....